How To Make Lard

“How to make lard, wait… you mean that greasy stuff grandma used to use on the cast iron pans?”

Yup, I’m talking about that greasy stuff that grandma used to grease her pans, as well as make her biscuits flaky and fluffy, and her pie crusts brown perfectly. Right about now you may be thinking, but I thought that stuff was bad for you? Isn’t it is full of saturated fats that clog up your arteries and make you fat and ugly?!?

The Quick History Of Lard

Well, perhaps a quick history lesson is order. Over a hundred years ago, a cottonseed oil company that goes by the name Proctor & Gamble had a problem. The cottonseed oil they produced (which was burned in lamps as a light source) was no longer needed with the recent invention of the lightbulb.

So, what did they do with all that cottonseed oil? They hydrogenated it, and Crisco was born! Immediately Proctor & Gamble started marketing it as the preferred cooking oil, better than lard and butter.

They had a problem though, lard had been in the kitchens of America since the country started, and American’s were slow to give up their lard.

What did Proctor & Gamble do about it? They launched huge marketing efforts against lard, painting it as a detriment to health. Slowly but surely, people abandoned lard, after hearing over and over again how bad it was for them.

The question is, is it really that bad for you? One of the main concerns with lard is it’s saturated fat content, which typically make up about 40% of the fat in lard. Interestingly enough, some recent studies are showing that saturated fats may not increase your risk of cardiovascular disease, as summed up in this article by Healthline.

Is Lard Really “Good For You?” 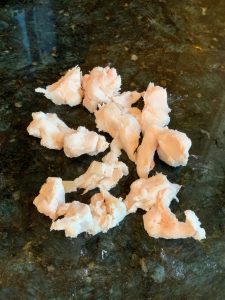 So should you go out and start binging on lard? Well no, as the old saying goes, all things in moderation But if you are going to use a cooking oil, wouldn’t you rather use what’s best for your health?

Even more so, if you are making your own lard from pasture raised pigs (as you are about to learn how to do), you know you have a very clean and healthy source of lard, full of vitamin D and oleic acid. Lard without the additives and chemicals. Healthy pigs=healthy lard.

Compare that to Crisco. First ingredient: soybean oil. This soy is no doubt GMO, as nearly 90% of all soy grown worldwide is genetically modified. But that’s another conversation all together! Also found in Crisco is TBHQ, a chemical preservative.

So what’s your impression of lard now? Maybe grandma did have it right when she was using lard! So now let’s go over how to make some!

How To Make (Render) Your Own Lard

Things you will need: 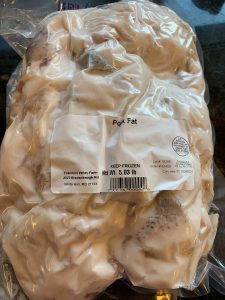 If you buy our 5lb pork trimmings fat bag, it will come precut, all you will need to do is break it up a bit. If you buy leaf lard fat, you will want to cut it into bite size pieces.

Which type of fat do you want to use? We use the trimmings fat, because there is much more of it on the pig (and its easier because its already cut up). Leaf lard fat is the fat that surrounds the loin and kidneys and is considered a “higher quality fat” as it is lighter and less dense than the other fat. This makes it excellent for fluffy biscuits and flaky pie crusts.

Step 2. Place your fat in the crock pot and set to low. 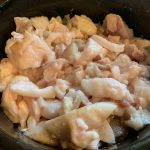 You are going to cook this fat for about 24 hours. The trick here is low and slow. If you try and rush the process and cook with high heat, you will end up burning the pot and passing on that burnt flavor to your lard. We want to render the fat into lard nice and slow!

Making a big batch? We also make lard on the stove top, in a big pot. It works that way just fine as well, so long as you keep the heat very low!

You want to keep stirring your fat, every few hours, making sure it doesn’t stick to the bottom. If you go to bed, make sure your crock-pot is set to the lowest temp setting, even “keep warm” if your crock-pot has that function.

Step 4. Turn off and cool 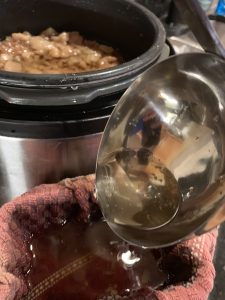 You will know your lard is finished once the fat chunks have shrunk considerably and have turned a light brown color. These are called the cracklings. Some people will take the cracklings and fry them, then use them like crotons. Allow the pot to cool slightly, so that you can safely handle it without burning yourself. Just don’t let it cool so much that it starts thickening, you still want it warm for straining.

Now that your pot has cooled some, you can place the cheesecloth over your jar or container, and pour your lard through the cloth, keeping back the browned chucks.

And there you have it! You’ve made lard! It will harden and turn white over the next few hours, and you can refrigerate it at that point. We routinely keep lard refrigerated for over 12 months. You can use it just like butter or any other cooking oil, just be aware that it may impart a pork or bacon like flavor to some dishes. But that extra flavor is one of the nice benefits of lard.